CVU, who are responsible for managing and maintaining the capital’s highways on behalf of Transport for London, are currently delivering a series of public realm improvements along red routes in London. One of their recent projects was to remove dense vegetation and develop a new low-height landscaping scheme around the edge of a large central reservation along the East Cross Route in Hackney. We were approached to provide ecological input into the scheme in order to ensure that the works could proceed smoothly and in-line with legislation relating to wildlife.

‘Babec’s phase 1 habitat survey was very thorough and their toolbox talk provided clear guidelines to ensure the landscaping team could work effectively without disrupting established habitats. As a results of their recommendations, we were also able to implement measures to increase biodiversity at our project site.‘

In the first instance, we undertook an extended phase 1 habitat survey of the central reservation to identify and map the habitats present and assess the potential of the site to support protected species. We also undertook a ground-level assessment for bats of all trees within the central reservation and used internet based sources of information to search for nearby designated sites.

During the field survey, we recorded an active badger sett within the centre of the site, suitable habitat for breeding birds and several stands of the invasive plant ‘giant hogweed’. We also identified potential roosting features for bats within four trees, which were photographed and tagged to allow them to be easily identified in the future. As badgers, breeding birds, bats and giant hogweed are all subject to statutory control, the landscaping proposals would need to incorporate due regard for these species.

We therefore provided a report which set out simple avoidance measures for breeding birds and bats, and detailed recommendations for the control of giant hogweed. In consultation with CVU, it was decided that the badger sett could be retained and protected throughout the works. We therefore recommended measures to avoid harm and minimise disturbance and obstruction to badgers. This included marking out the location of the sett and delivering a toolbox talk to the landscaping team prior to the commencement of works.

We also determined that the central reservation is designated as a Site of Importance for Nature Conservation (Red Path Wood SINC), indicating its importance for wildlife at a Borough Level. We therefore recommended measures which could be adopted to not only protect and conserve Red Path Wood SINC, but enhance it in-line with local policy while helping contribute towards the targets of the Hackney Biodiversity Action Plan. 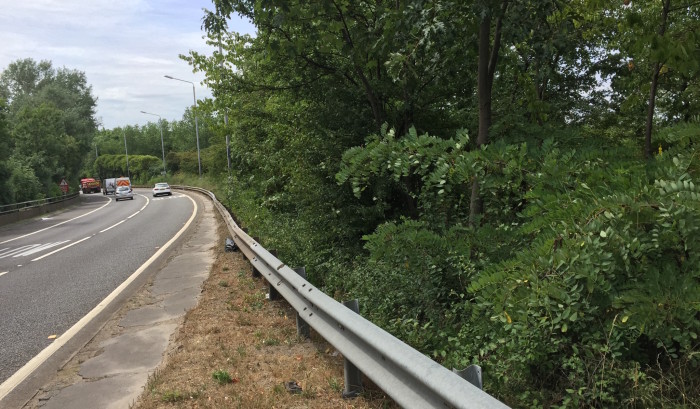 The landscaping scheme was completed on-time and with due regard for the protection of important species and designated sites. As ecology was considered in the early stages of the project, we were able to recommend simple measures to avoid negative impacts on protected species from the outset. As well as being the most effective method of reducing negative impacts, this is also often the most economically advantageous and easiest option.

We manage projects for clients ranging from private homeowners to international engineering firms. Here is a small selection of our portfolio.