On the hunt for the last mouse-eared bat…

The entrance to the disused tunnel, the location of which is now a closely guarded secret, has since been sealed off to members of the public. It takes three of us to loosen the deadbolt and finally prise open the door. We’re quickly engulfed in darkness so it’s torches on and the hunt begins…

Bats in temperate latitudes need quiet and cool places where they can slow their metabolism and become dormant over winter, so hibernation sites are frequently found in disused underground sites, such as caves, mines and tunnels. For those not lucky enough to have been involved in bat hibernation checks before, it involves painstakingly checking tiny crevices and gaps for bats using nothing more than a torch and binoculars. When hibernating bats are located, pinpointing the species can be a challenge even for experts. It’s often just tiny clues like the shape of the tips of the ears or the size of the feet that give it away.

Within a few hours, we’re getting wet from a torrent of ice cold drips that are percolating through the brickwork, but we’ve recorded a good variety of bat species. This includes some of my favourites, Daubenton’s with their portly faces and large hairy feet, and Natterer’s with their glistening white undersides. But still no mouse-eared.

And all of a sudden, roosting in a broken brick at the highest point of the tunnel, the last greater mouse-eared bat! With a wingspan of up to 45cm, the greater mouse-eared bat is one of the largest European bat species. A member of the Myotis genus, it has sandy coloured fur with a white belly and a bare pink face with large ears. 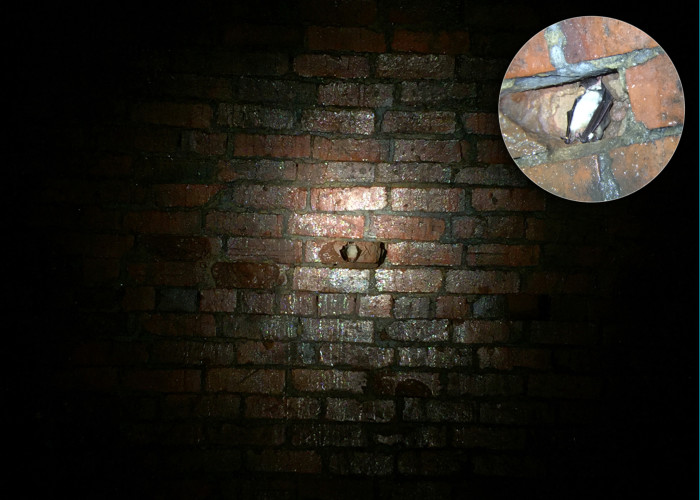 By the end the day we had recorded nearly 150 bats in the tunnel, an assortment of Daubenton’s, Natterer’s and whiskered/Brandt’s/Alcathoe, and of course the greater mouse-eared. While this is a healthy count for a bat hibernation site, it’s some way short of the 543 bats recorded in the same tunnel in 2015.